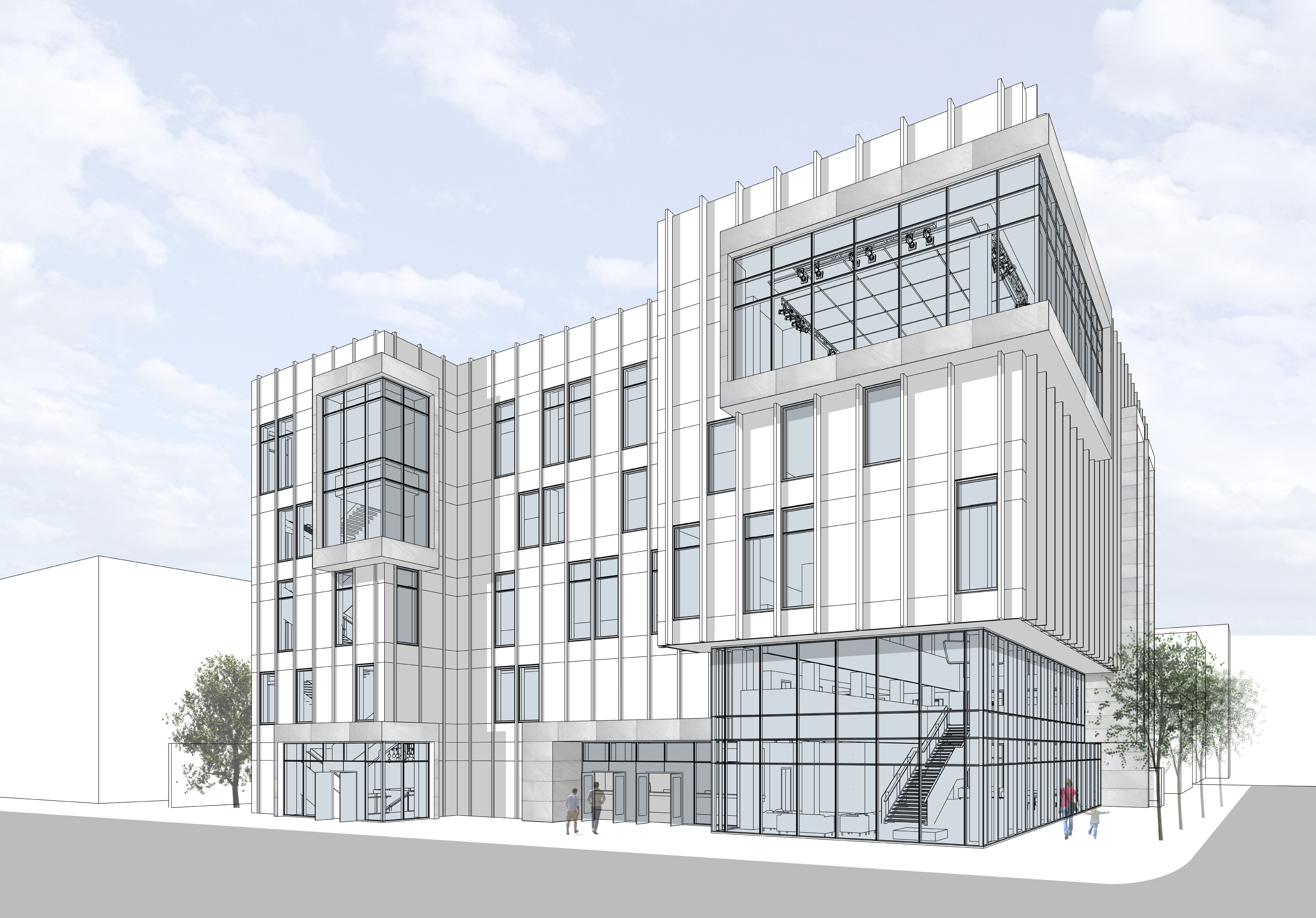 This thesis projects is an attempt to understand the role of form and function in the design process. Inspired by a history of architectural movements that are either dominated by formal moves or functional planning, this thesis explores how the two ideas were intended to be equal and complementary tools of design to create practical architecture that responsibly serves the user. This project attempts to synthesize many successful design approaches into a unified process.

Primarily, the concept of the design began as a function-based system that was then manipulated with formal moves, but it also relates to relevant typologies to understand the core forms and functions of the building. This was based on extensive precedent research to understand the practical identity of the types of space. The goal of the project is to discover a personal design process that more successfully creates working architecture.

The complete Thesis Book for this project is located here: Form and Function in the Design Process

This thesis project was to be located in downtown Montgomery Alabama. The downtown district of the city is undergoing rapid growth to add more housing and local activity to the relatively inactive area. The criteria for selecting a site was based on finding a location that could have an impact on this cultural growth.

The selected site is located in the active and growing Entertainment District of downtown Montgomery, near the river and baseball stadium. It sits in a developing Arts Community and has a relationship with a series of other art and performance spaces in downtown Montgomery along a primary pathway.

The site also sits at the border of two distinct areas and in a diverse context of programs. The site is bordered by the growing local entertainment district and the tourist convention district, joined together at The Alley. Many major roads lead directly to or pass by the site and connect it to other major areas of the downtown city. There is also many public parking options in this active and growing area.

The current site is a small parking lot on a prominent corner in a relatively built up area of the city. It is located in a historic district, surrounding by protected buildings that have been converted to offices, entertainment, or a limited selection of loft housing.

The program of the thesis project was selected to be an Art Incubator Center, chosen to relate to the existing program pieces of the city and to add new cultural potential to the downtown area. As an Incubator Center, it is meant to be a space for artists to develop their craft and share it with the community, all in one space. This program includes three main types of space: gallery space, studio space, and performance space.

Multiple precedent studies were done to understand the needs of  the three primary types of space. These examples study both the interior materiality and spacial character of the interior and the formal strategy of the exterior.

The chosen site impacted the first steps of the design process. It began by considering the functional impact of the site. The front corner is most prominent because of the converging major roads and the sun path across the site. Then the mass is manipulated formally to emphasize the corner, and then a functional grid was applied to the resulting form. Last, the grid was used to regulate punctured windows and pulled out window boxes to respond to the interior conditions.

Based on this analysis, the program was distributed with the primary public elements on the lower floors. The ground floor includes the main Gallery, which has a direct connection to the public street, and the lobby for the performance spaces on the second floor. The primary Black Box Theater and the secondary Performance Studio are the main event spaces of the Art Center. The basement holds gallery and studio spaces that are not dependent on light.

The upper floors are the primary spaces for the artists, so are more private and have connection to the public. The third floor acts as a mezzanine for the theater while the fourth and fifth floors are filled with studio spaces. The floors include a variety of specific studios for painting, sculpture, music, digital work, and fabrication. The top floor also includes a Lookout Studio, a multiuse performance and gathering space. 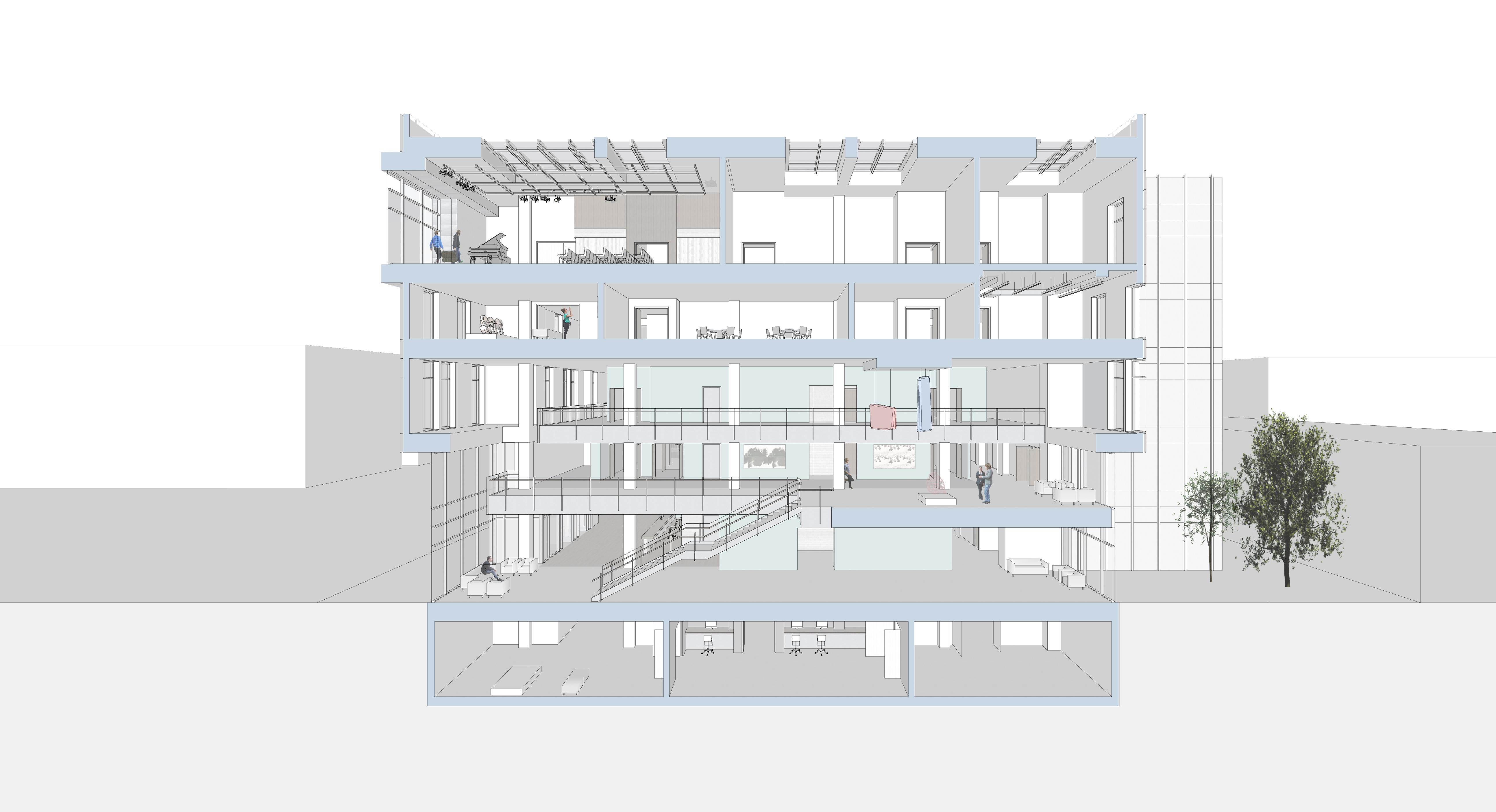 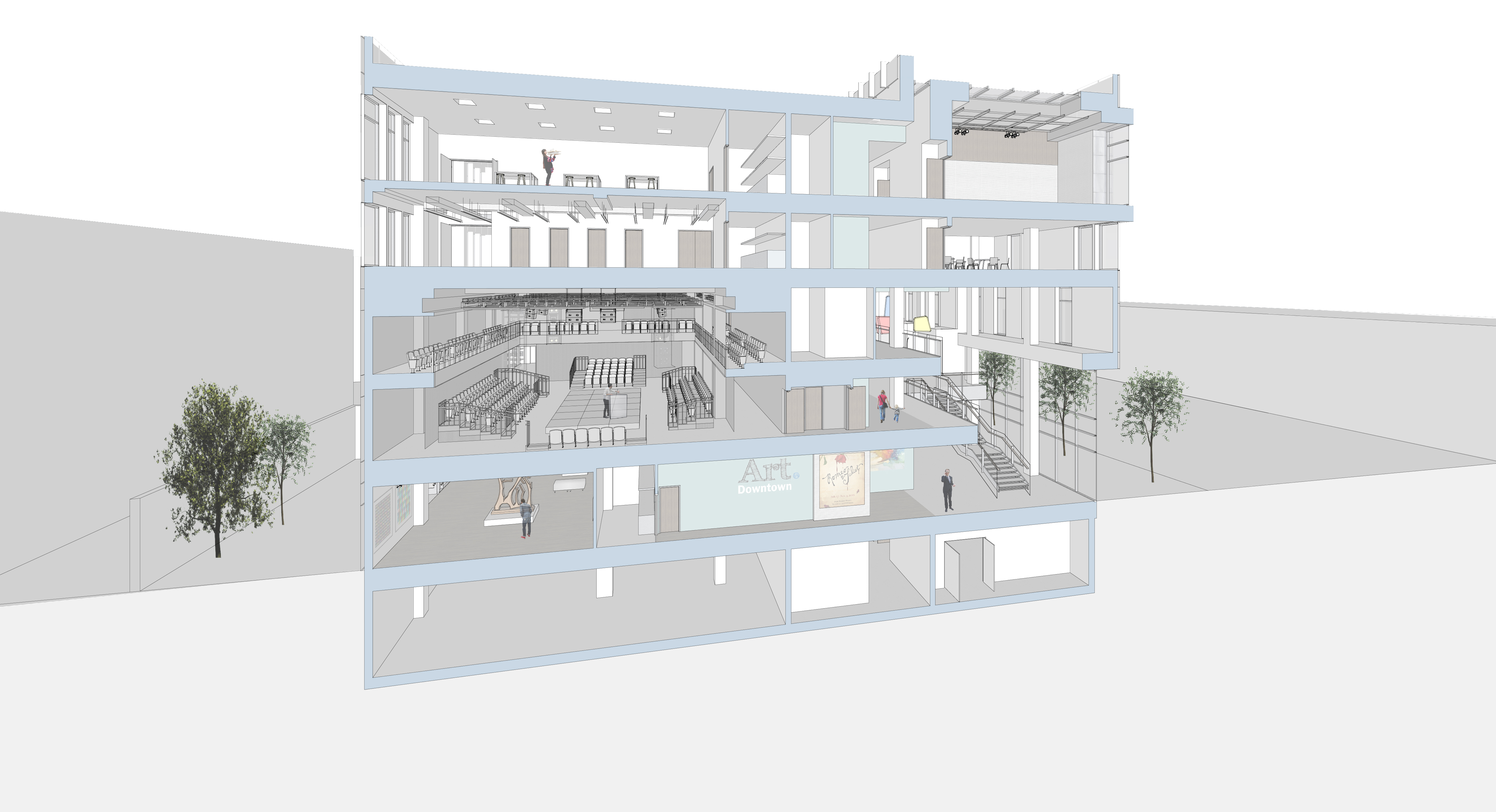 The main triple height lobby serves as both a gathering space and a gallery that connects to the outside community through the glass curtain wall facade. The Gallery has a strong street connection through its secondary circulation lobby. It also expands into an outdoor sculpture garden.

The Black Box Theater can be reconfigured into multiple seating layouts for different types of performance. The upper mezzanine can be used for both public seating and as a service catwalk. The upper level studios and the Lookout Studio feature skylights to provide even and diffused upper light. 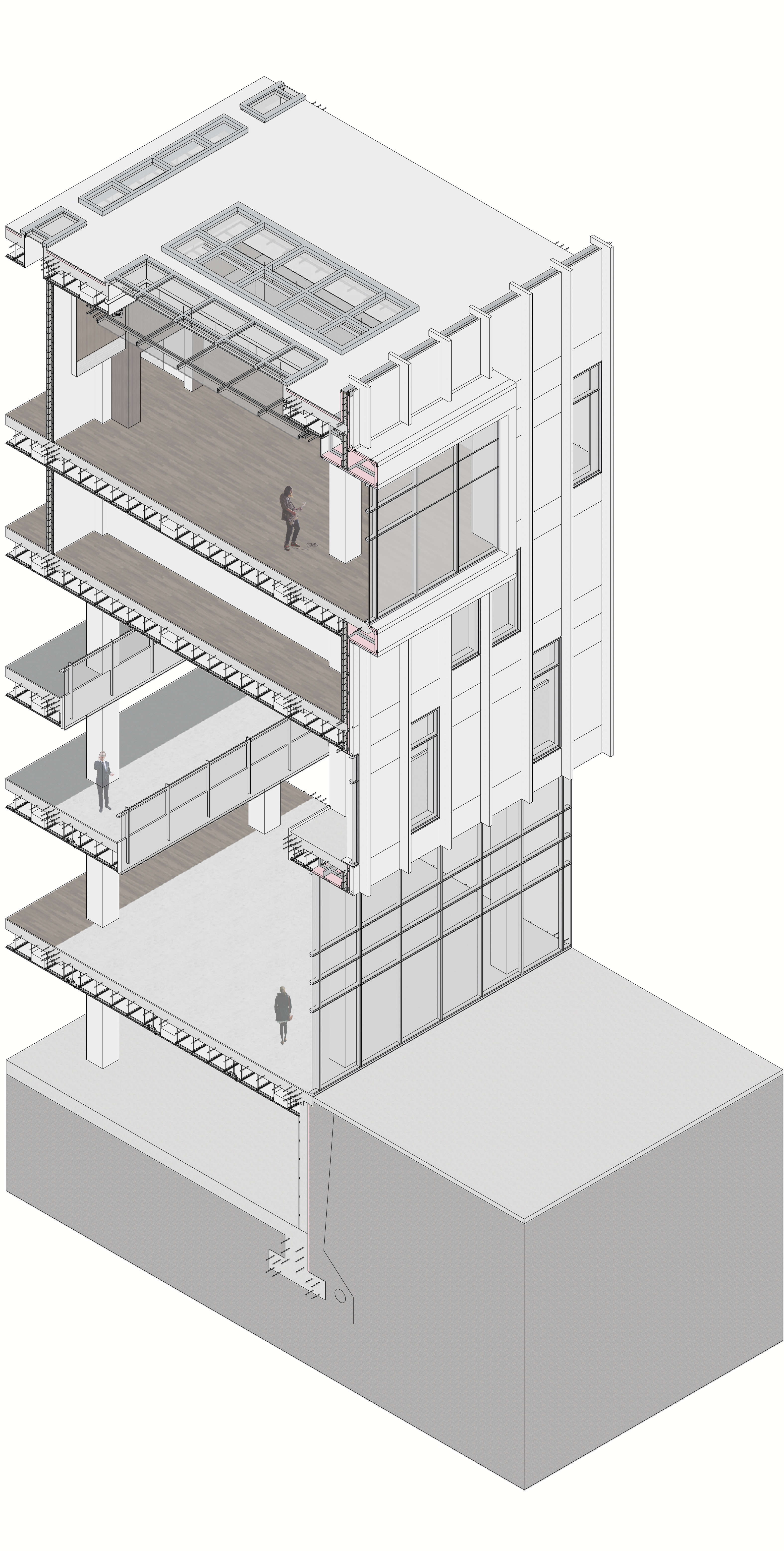 The structure of the building is a two way concrete system with CMU structural walls. It was chosen because it could span the long distances required for the Black Box Theater and because of its relative permanence compared to other construction systems. 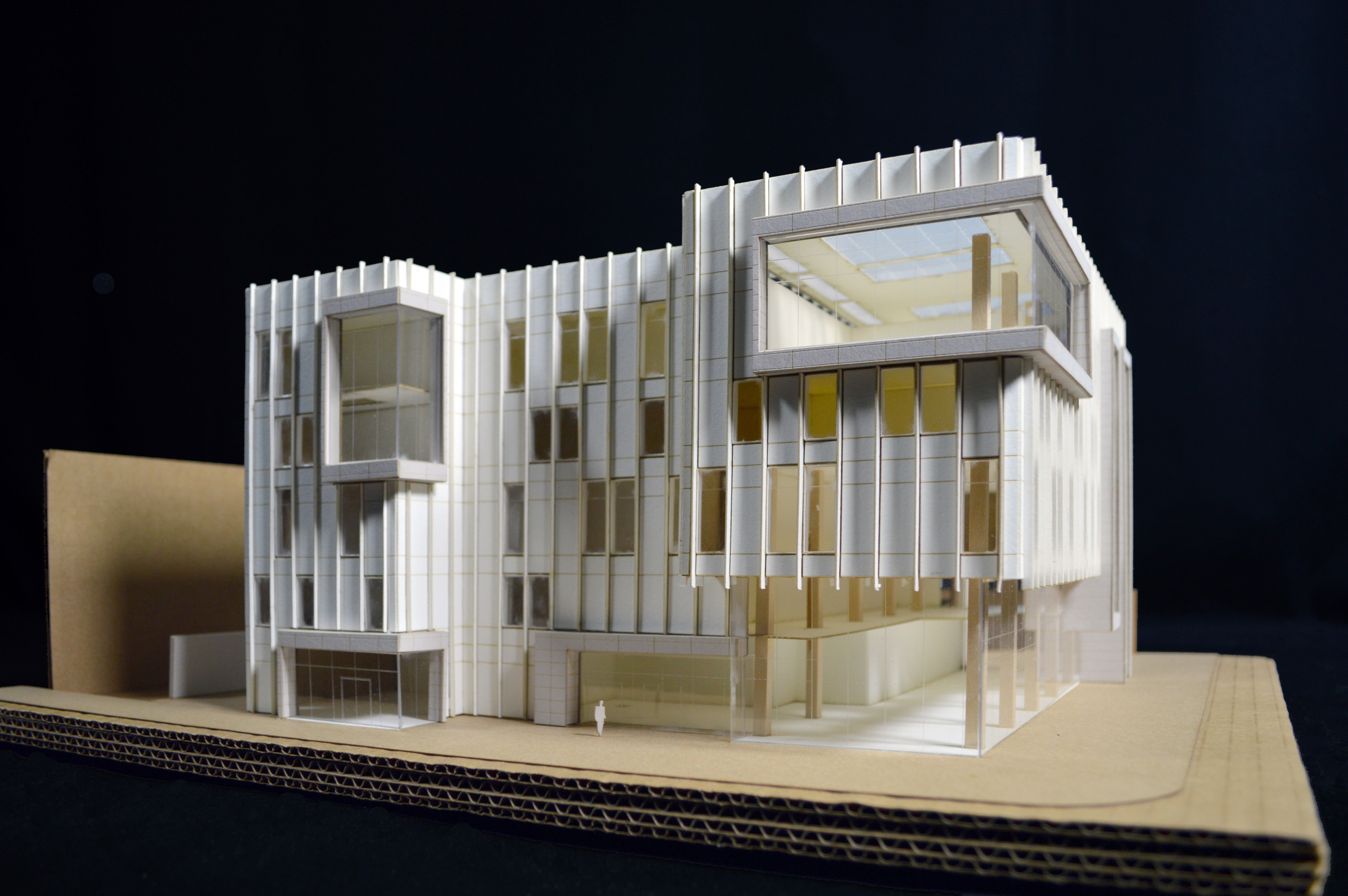